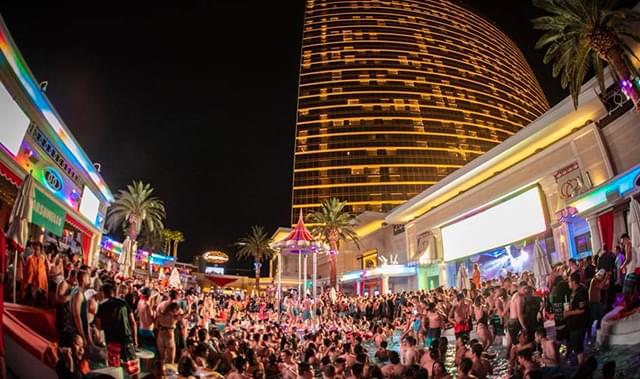 How Much Does It Cost To Get Into Vegas Clubs?

If you plan on partying in Las Vegas, you might be wondering how much it costs to get into Vegas clubs.

Well, the truth is, what you pay depends on where you go, what event you go to, and what you want to spend.

Are you on a limited budget, for instance, or are you looking for high-priced bottle service? Whatever your needs are, call us at 702-344-0100, and we can help.

As an experienced event promoter in Las Vegas that partners with the top venues, we have a wide range of offerings that you will most likely find very appealing.

To learn more about the average cost of getting into a club in Vegas, keep reading.

How Much Does It Cost To Get Into Vegas Clubs?

The cheapest way to get into Vegas clubs is by buying a ticket in advance.

Here are the prices you can expect to pay at some of the top venues:

Another way to get into Vegas clubs is through general admission at the entrance.

Cover charges in Vegas usually start around $20 for women and $50 for men but vary per venue.

Note: If you want to get in via general admission at the entrance, we recommend showing up before 10 pm.

A pricier yet more advantageous way to get into Vegas clubs is through VIP bottle service.

Prices for bottle service start around $400 at the lowest and run up to $15,000. Some venues also have specialty bottle service packages that run as high as $200k.

The advantages of bottle service include (1) instant access to the venue, i.e., no waiting in long lines, (2) having your own cocktail waitress, busser, and security guard, (3) getting unlimited free mixers, (4) having storage for your belongings, and (5) not paying a cover charge.

Reserve Vegas Bottle Service With Us

If you would like to reserve bottle service through us, or if you need help reserving tickets for general admission, call us at 702-344-0100. We provide you with quick and easy access to the most highly sought-after nightclubs and dayclubs in the city.

Specific Pricing At Each Club

Special events and holidays will cost even more, which holds true for all Vegas clubs.

General Admission At Drai’s After Hours:

The cover charge at Drai’s After Hours is $35-$75 for men and $20-50 for women. The cool thing is, if you register in advance through their guestlist, women can enter free of charge, and men can get discounts.

Finally, there is specialty seating that is even more expensive.

Other table sections at Drai’s Beachclub & Nightclub include:

Drai’s has a variety of drinks that cost anywhere from $8 all the way up to $100.

Tables come with free basic mixers such as soda, juices, and tonic.

Bottles of alcohol at Drai’s have a huge price range, starting at $395 and going as high as $200k.

Most likely, the lowest price that you will find at this venue is $1500 for the Terrace Cabana, although it is possible to get a Strip View Table for $1000. Just keep in mind that these tables are both located outside.

Other table sections at OMNIA Nightclub include but are not limited to:

The areas within OMNIA Nightclub include:

Main Room, Balcony, Heart of Omnia, and the Terrace.

Bottles of Alcohol At OMNIA Nightclub:

Bottle service at Hakkasan averages around $1500.

On the low-end, you can expect to pay at least $600 for a spot in the 3rd floor lounge area. A mid-tier table, such as one of the Mezzanine tables, will run you around $2000. A premier table like the Main Room Lower Dance Floor will cost you $6000 or more.

Other table sections at Hakkasan include:

Bottles of Alcohol At Hakkasan Nightclub:

Other table sections at XS include:

Bottles of Alcohol At XS Nightclub:

The cover charge hovers around $20 for females and $30 for males. With that said, cover charges can run a lot higher during special performances and holidays.

Table Service At The LIGHT Nightclub:

Bottle service averages around $1500 at this venue.

Drink Prices At The LIGHT Nightclub:

Bottles of Alcohol At The LIGHT Nightclub:

Bottle service at TAO averages around $1200.

For an entry level table within the Voyeur hallway, you can expect to pay $600. A mid-level table like one of the Skyboxes will cost you $1750 or so. A premier area like the Dance Floor tables can run you as much as $5000.

Other table sections include:

Beers start at $8, while Shots cost around $10. Mixed Drinks and Cocktails cost approximately $13.

Bottles of Alcohol At TAO Nightclub:

Why Work With Us

We work directly with several top Vegas clubs, which provides us with key information about upcoming events, promotions, rules and restrictions, and more. We strive to keep you up-to-date!

We make sure you do not get stuck waiting in long lines so that you can spend more time doing what you love.

We provide excellent customer service and respond to your inquiries promptly.

How Much Are Vegas Clubs In General?

We get this question a lot.

The truth is, the amount you pay at Vegas clubs really depends on where you go, when you go, how many people are in your party, and what your male-to-female ratio is.

You’ll also need to decide how you plan on getting to the venue, whether you are going to walk from your hotel, drive yourself, or order a ride.

If you are looking to save money during your visit, some things you can do include:

As it pertains to rides, we can save you money while getting you to and from your club of choice quickly. We offer fast and affordable limo and bus services for those staying at hotels on The Strip.

Checking In For A Table Reservation

Check-ins at most Vegas clubs take place before 11:00 pm. If you have booked bottle service at a venue, you will want to locate their Table Service area and present a valid form of ID.

Vegas clubs have certain rules that you need to follow.

Note: Personal items may be searched by venue staff at any time. To avoid running into issues, contact us for a complete list of prohibited items for your venue, as venues update their policies from time to time.

For more information about what you should and should not wear, contact us, and we’ll provide you with the most up-to-date information.